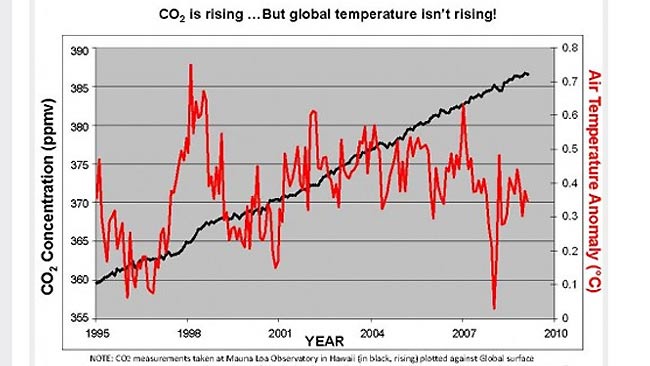 THIS is the chart climate change sceptic Senator Steve Fielding hopes will convince Al Gore that global warming is not real.

Senator Fielding is trying to score a one-on-one meeting with Mr Gore, who is in Australia promoting several environmental causes, to prove to him that climate change sceptics are right.

Senator Fielding has promised to clear his schedule for any chance to meet the former US vice-president and Nobel Prize-winning environmental campaigner. "The ball's in his court," a spokesman for the senator told news.com.au.

The spokesman has said Mr Gore is aware that Senator Fielding holds a crucial vote in Parliament and that any major green schemes - such as the Government's model to reduce carbon pollution in Australia - essentially rely on his support.

"(Mr Gore) said 'look, the schedule's tight but hopefully we can work something out'," when Senator Fielding approached yesterday for a meeting on the issue, the spokesman said.

Senator Fielding wants to present a graph to Mr Gore which argues global temperatures have stabilised during the past 15 years, even as carbon emissions have risen.

The graph was used by the UN in its reports on the effects of climate change. UN scientists say the world has warmed in the past 150 years, but temperatures have plateaued at warmer-than-normal levels in the past decade after a particularly hot year in 1998.

It is the same graph Senator Fielding showed Climate Change Minister Penny Wong when the pair met to negotiate on the proposed Carbon Pollution Reduction Scheme, which will set a price on carbon emissions.

"The Government needs to explain to the Australian people why global temperatures have remained steady over the last 10-15 years despite skyrocketing man made carbon emissions," Senator Fielding said on his website.

Senator Wong and Prime Minister Kevin Rudd have set a targets of cutting emissions by five to 25 per cent by 2020. Mr Gore said that was not enough.