JERICHO'S WALLS BACK UP BIBLE

By Bryant Wood and Gary Byer

In the Old Testament, in Joshua chapter 6, we have an account of the Israelites defeating the city of Jericho when they came into the Promised Land after wandering in the wilderness for 40 years. According to the biblical account, after the Israelites marched around the city once a day for six days, on the seventh day they encircled the city seven times. On the seventh time around, the priests blew the trumpets, the people shouted and the walls fell flat.

The first major excavation of the site of Jericho, located in the southern Jordan valley in Israel, was carried out by a German team between 1907 and 1909. They found piles of mud bricks at the base of the mound the city was built on.

It was not until a British archaeologist named Kathleen Kenyon re-excavated the site with modern methods in the 1950s that it was understood what these piles of bricks were. She determined that they were from the city wall which had collapsed when the city was destroyed!

The story in the Bible goes on to say that when the walls collapsed, the Israelites stormed the city and set it on fire. Archaeologists found evidence for a massive destruction by fire just as the Bible relates. Kenyon wrote in her excavation report,

"The destruction was complete. Walls and floors were blackened or reddened by fire, and every room was filled with fallen bricks, timbers, and household utensils; in most rooms the fallen debris was heavily burnt."

What caused the strong walls of Jericho to collapse? The most likely explanation is an earthquake. But the nature of the earthquake was unusual. It struck in such a way as to allow a portion of the city wall on the north side of the site to remain standing, while everywhere else the wall fell.

Rahab's house was evidently located on the north side of the city. She was the Canaanite prostitute who hid the Israelite spies who came to reconnoiter the city. The Bible states that her house was built against the city wall. Before returning to the Israelite camp, the spies told Rahab to bring her family into her house and they would be saved. According to the Bible, Rahab's house was miraculously spared while the rest of the city wall fell.

This is exactly what archaeologists found. The preserved city wall on the north side of the city had houses built against it.

The timing of the earthquake and the manner in which it selectively took down the city wall suggests something other than a natural calamity. A Divine Force was at work. In the New Testament, we read,

"By faith the walls of Jericho fell, after the people had marched around them for seven days. By faith the prostitute Rahab, because she welcomed the spies, was not killed with those who were disobedient" (Hebrews 11:30-31).

In the spring of 1997, two Italian archaeologists conducted a limited excavation on the ancient tell of Jericho. Lorenzo Nigro and Nicolo Marchetti, working under the auspices of the new Palestinian Department of Archaeology, excavated for one month on the fringes of Kathleen Kenyon's west and south trenches. Their dig was the first foreign expedition in the Palestinian-controlled areas of the West Bank since self-rule began in 1994.

After their excavation, Nigro and Marchetti announced they found no evidence for a destruction from the time of Joshua. While it is too soon for the academic community to see details of their discoveries, their announcement suggests their excavation was conducted to disprove the Biblical account of Joshua's capture of the city. Is it further possible that the Palestinian Authority supported this dig for the express purpose of denouncing any Jewish connection to the site?

The walls DID come tumbling down!

As to their evidence, Dr. Bryant Wood, Director of the Associates for Biblical Research and one of the leading experts on the archaeology of Jericho, recently responded.

"It matters little what the Italian archaeologists did not find in their month-long dig. The evidence is already in. Three major expeditions to the site over the past 90 years uncovered abundant evidence to support the Biblical account."

As Wood went on to point out, John Garstang (1930-1936) and Kathleen Kenyon (1952-1958) both dug at Jericho for six seasons and a German excavation directed by Ernst Sellin and Carl Watzinger dug for three. All found abundant evidence of the city's destruction by fire in a layer related to the Biblical date of 1400 BC. 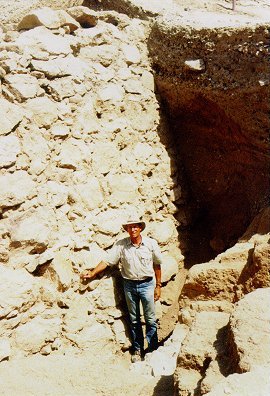 Bryant Wood standing beside a section of the collapsed wall of Jericho.

September of 1997, Dr. Wood visited Jericho and examined the results of the Italian excavation first hand. Incredibly, he found the Italians had uncovered the stone outer revetment wall at the base of the tell with part of the mud brick wall built on top of it still intact. In the balk of the Italian excavation, at the outer base of the revetment wall, Wood noticed the remains of the collapsed mud brick city walls which had tumbled. Not only did the Italians find the same evidence uncovered in the earlier excavations, it fits the Biblical story perfectly!

"The Italian excavation actually uncovered most of the critical evidence relating to the Biblical story. But even more exciting is the fact that all the evidence from the earlier digs has disappeared over time. We only have records, drawing and photos. But the Italians uncovered a completely new section of the wall which we did not know still existed. I had my photograph taken standing next to the wall where the mud brick collapse had just been excavated!"

Unfortunately, the Italian archaeologists, the Palestinian Authorities, the Associated Press and most of the world doesn't realize any of this. It is a sad commentary on the state of archaeology in the Holy Land, when the purpose of an excavation at a Biblical site is to disprove (unsuccessfully) the Bible and disassociate the site with any historical Jewish connection.