Here is what an ancient sling looked like. It was made from animal hair.

Many people think of ancient slings as not much more than toys. However, the Bible tells us that a young shepherd named David killed the giant Philistine, Goliath, with a very accurately slung stone (1 Samuel 17:40, 49). The Bible states that the Israelites used slings as weapons of war (2 Kings 3:25). 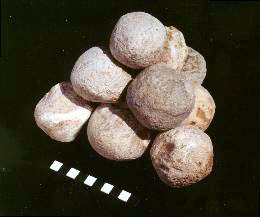 Bronze Age sling stones
from Khirbet el-Maqatir (West Bank, Israel) Not naturally rounded, they all have evidence of being shaped by man. These stones don't talk, but they do tell tales about the people who once lived there.

Archaeologists are finding evidence that confirms these biblical stories. Sling stones were important weapons in an ancient army's arsenal.

At one excavation site in Israel, 10 miles north of Jerusalem, sling stones have been found in almost every area of the dig. Interestingly, the site is located in the territory given to the tribe of Benjamin. This tribe was known for an elite corps of slingers (Judges 20:15-16; 1 Chronicles 12:2), many of whom were left-handed slingers. 700 of them could each "sling a stone at a hair and not miss."

"After three seasons of excavation, we have found nearly three dozen sling stones. Most are roughly round and slightly over two inches in diameter, from the size of a billiard ball to a tennis ball."

The best method of releasing

a stone from a sling is by

The Art of Slinging Stones

A sling such as David may have used.

It is unclear when men first started slinging stones instead of throwing them. Yet, once known, it did not take long to learn that stones could be slung faster, farther, and more accurately, than they could be thrown. Early slingers also found smoother, rounded, stones were far more effective than any other shape.

Ancient hand slings generally consisted of a single long strip of leather or woven wool, with a central "pocket" for the stone. The longer the sling, the greater its range. Long-range slings were about 3 feet long (0.9 meters).

"Slingers are often visualized as releasing overhead, yet the best way to utilize a sling is by an underhand motion, like a softball pitcher," said archaeologist Grace Kellner. "Elaborate wind-ups were wasted motion. One windup, like a good softball pitcher, was sufficient."

Before development of the modern compound bow, ancient slingers were as effective as archers and served as an important part of any military force.

Surprisingly, a good slinger hurled a stone as far and accurately as a good archer. Roman military texts recommended archery target practice at about 200 yards (183 meters). Slingers are known to hurl their projectiles even farther, as much as 440 yards (402 meters) (a quarter of a mile / 0.40 km).

As for accuracy, one ancient writer noted that the best slingers "would wound not merely the heads of their enemies, but any part of the face at which they might have aimed." Experiments demonstrate that missiles leave a sling in excess of 60 miles per hour (97 km/h).

One Roman writer noted that opponents in leather armor were in far greater danger from sling missiles than arrows. Even if the stone did not penetrate the armor, it was capable of inflicting a fatal internal injury.

While typical sling stones used by the Greek and Roman armies were the size of golf balls, different cultures liked different sizes. In fact, at some ancient Greek and Roman battle sites, archaeologists believe they can differentiate which slingstones were standard equipment for which army.

During all periods, it was important for an army's projectiles to be uniform in size and weight. Otherwise, a slinger would need to compensate with each toss. Each army standardized the size and shape for maximum accuracy, speed and distance.

Not all sling stones were stones

Many sling stones from the Greek and Roman periods were not stone. Sun-dried pottery and lead both produced small, heavy balls. Lead balls were often manufactured with inscriptions on their surface. Government-issued Greek and Roman munitions were frequently inscribed with the name of the slinger's military formation or commanding general. Other inscriptions were more creative. "Take this," "Ouch," and even "For Pompey's backside," added insult to injury